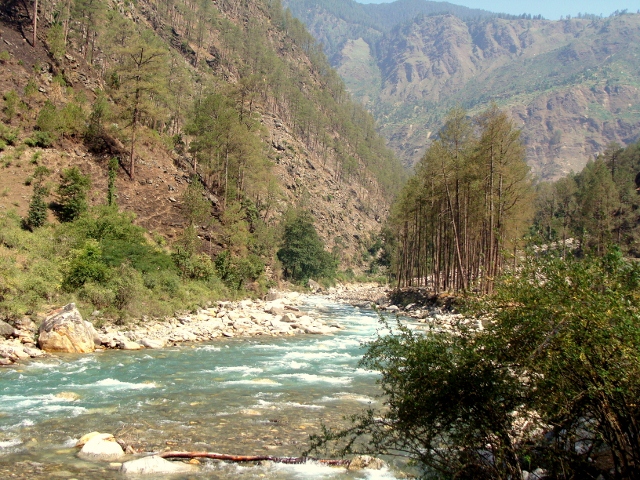 Flyfishing for Trout in the Himalayas

We hit the road at 5am for our very long bumpy 4 hour drive to Daksum, the most beautiful valley in the region. We pass fields upon fields of freshly planted rice which are now emerald green. We turn off the major 2 lane road, where you find the saffron growing in November, to a 1 lane road from hell. Through small villages with pots holes the size you’d lose a VW Beetle in we charge in our SUV’s.

We climb into the mts. and finally reach our destination at about 7,500 feet.
The green green valley is surrounded by the snow capped Himalayas. The Daksum river races past with small rapids that might be run in a small rubber raft.

A family fishing trip in Kashmir calls for lovely carpets to be spread on the ground under the shading Chinar trees. A gas 2 burner, fry pans for cooking the fish, and extra food brought just in case there weren’t great baskets of fish caught that day.

Some went up the river 1km. and worked their way down, others went far down the river and kept going. I learned that 5-6 casts and you move on cause the water has been “disturbed” If you catch a fish it is disturbed too, so you move on and don’t try for the others lurking between the rocks.

I was loaned a great graphite rod and reel for the day. Even with that I still didn’t look like Brad Pitt in “A River Runs Through It”….but I was told by the old man who was assigned to me that I was casting well. He tied my flies, drug me up and down ALL of the river, hopping over small streams, shallow areas, with him holding my hand most of the time for balance.

At lunch time we had some of the fish that had been caught thus far. I was fortunate to be given extra fish cause I was the visitor, and they knew I loved fresh fish straight from the stream into the pan.

My shoulder is just a bit sore. I only toppled over once trying to balance on the large and small boulders along the river bed. Didn’t tear, sprain or scrape any part of me so I was pleased. Only sank once at the rivers edge up to my ankle in slimmy mud. A bit sunburned, but all in all an injury free day, and my Tevas are washable.

I caught 1 very very small Rainbow Trout that sparkled in the sunshine. Too small to my mind so it was thrown back. When I returned to camp I saw that they kept such small fish. In the USA you would be shot for keeping such tiny fish. My first fishing teacher, my father, would have been horrified.

FYI as a young girl I held a record for years for catching the biggest trout in a small place in the Santa Cruz mts. that I went to with my father. I was the son he never had.

Since the years of trouble throughout the 90′s and early 2000 years, tourism and the economy in general, has been depressed and created a lack of food. Fishing year round they have fished out the river. Some say the terrorists poisened the river and killed the fish?? Who know which rumors are true.

After all the guys finally gave up trying for that 7kg. trout we packed the vehicles at dusk and headed out on the long bumpy drive home.

So if you have ever had a fantasy to fish for trout in the Himalyas it can easily be fulfilled. Let me know and I will point you in the right direction.